Books and Films: All About Soho 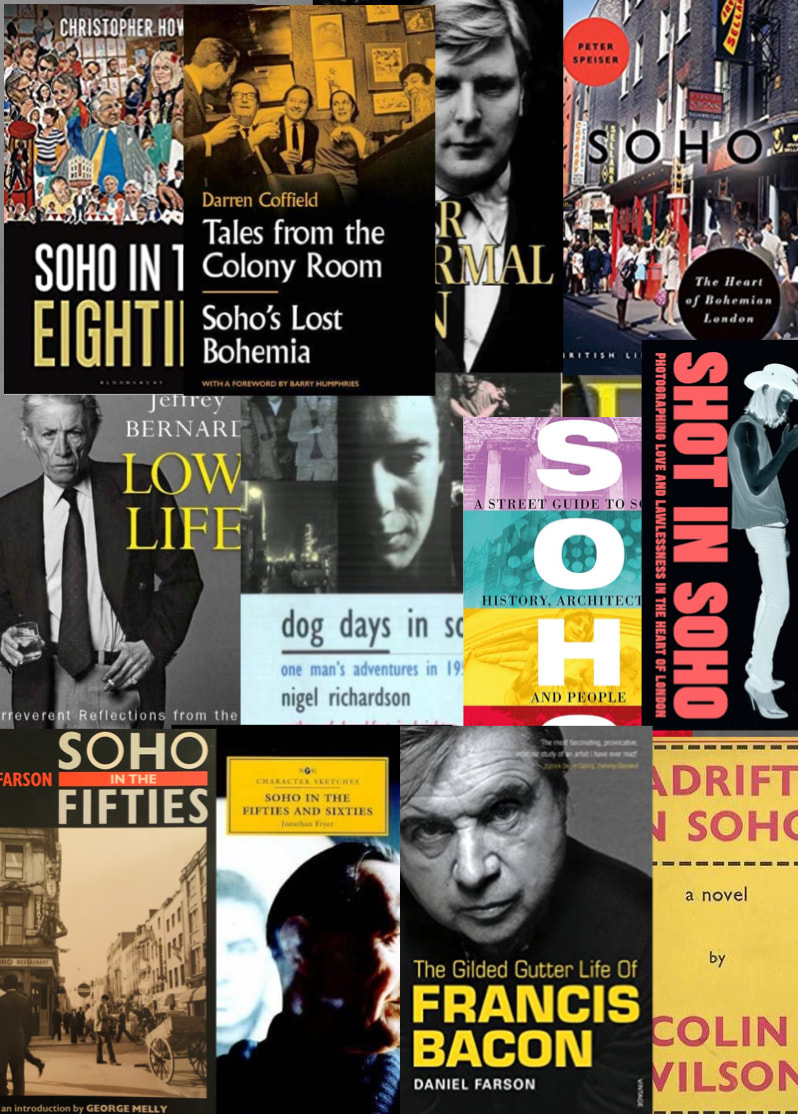 There are a lot of people involved in the story of Soho.

​They have all been for decades Soho's legendary characters.  Many have been and gone and many will come again soon.

They are known by the generic name of 'Sohoites'. 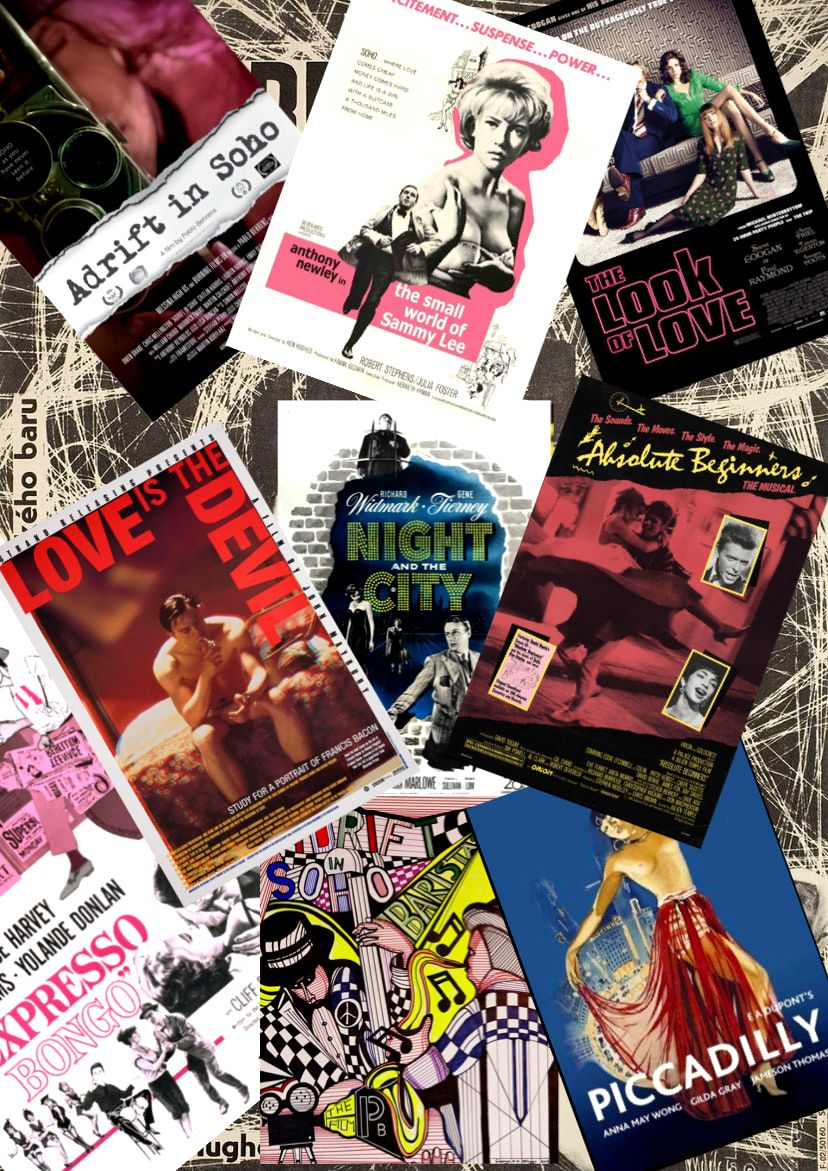 Last Night In Soho, 2021.
Directed by Edgar Wright.
​
Adrift in Soho, 2019.
Directed by Pablo Behrens. Based on the novel by Colin Wilson.
Available on Amazon Prime, iTunes, Google Play, Microsoft Movies and  on DVD.

The Look of Love, 2013.
​Directed by Michael Winterbottom.

Absolute Beginners, 1986.
Directed by Julian Temple. Based on the novel by Colin MacInnes.

The Small World of Sammy Lee, 1963.
Directed by Ken Hughes.

More information:  Adrift in Soho is available on Amazon Prime Video, iTunes and DVD. Website www.adriftinsoho.com. The Look of Love , Absolute Beginners, The Small World of Sammy Lee are available on Amazon Prime Video according to the latest distribution information.  Free Cinema Documentaries can be found on a BFI DVD released in 2006. The closest to Soho of this fantastic series is Night Time, about Piccadilly Circus and Every Day Except Christmas about Covent Garden market.  The Free Cinema manifesto was written in a coffee shop on Charing Cross Road in 1954.  For full cast and crew of all films go to IMDB search engine.

OTHER FILMS SET IN SOHO
Piccadilly, 1929, directed by EA Dupont.
Murder At The Windmill, 1949, directed by Val Guest.
Night and the City, 1950, directed by Jules Dassin.
Street of Shadows, 1953, directed by Richard Vernon.
Passport to Shame, 1958, directed by Alvin Rakoff.
Expresso Bongo, 1959, Val Guest.
Where Has Poor Mickey Gone? 1964, directed by Gerry Levy.
Ping Pong, 1986, directed by Leong Po-chih.
Love is the Devil: Study for a Portrait by Francis Bacon, 1998, directed by John Maybury.
More information on the list: here and  IMDB.
Soho was where a few planted the seed of inconformity in the 1950s that exploded into modern London with the Singing Sixties.  This process had worldwide repercussions and can still be felt today.

THE GOOD, THE BAD AND THE UGLY.

​The following books can be found or ordered in second hand bookshops. They are also on eBay and Amazon.  If we missed one, please let us know.

Soho in the Fifties, by Daniel Farson.
Adrift in Soho by Colin Wilson.
The Surrender of Silence by Iron Foot Jack, edited by Colin Stanley.
The Writing of Colin Wilson's 'Adrift in Soho', edited by Colin Stanley.
Absolute Beginners by Colin MacInnes.
Soho: Street Guide to Soho's History by Dan Cruickshank.
Tales From the Colony Room, Soho's Lost Bohemia by Darren Coffield.
Rock'n'Roll London by Max Woodbridge
Jeffrey Bernard is Unwell play by Keith Waterhouse.
Reach for the Ground by Jeffrey Bernard.
Low Life: Irreverent Reflections from the Bottom of a Glass by Jeffrey Bernard.
Soho: The Heart of Bohemian London by Peter Speiser .
Soho in the Eighties by Christopher Howse.
The Guilded Gutter of Francis Bacon by Daniel Farson.
Soho Cooking by Alister Little.
Members Only: The Life and Times of Paul Raymond by Paul Willetts.
The Story of Soho:  The Windmill Years 1932-1964 by Mike Hutton.
A Souvenir of the Windmill Theatre compiled by Jill MIllard Shapiro.
Soho Past by  Richard Tames.
Soho in the 1950s and 1960s by Jonathan Fryer.
A Scribbler in Soho by Naim Attallah.
Dog Days in Soho by Nigel Richardson.
Soho: A History of London's Most Colourful Neighborhood by Judith Summers.
I Know This Much: From Soho to Spandau by Gary Kemp.
Gangland Soho by James Morton.
Soho by Keith Waterhouse.
Soho Black by Christopher Fowler.
Margaret Thatcher Queen of Soho by John Brittan.
Soho Square: Stories, Essays, Poems, Pictures by Philip Roth.
Music in Soho: A Brief History by Kenneth Dunn.
The Seven Noses of Soho by Jamie Manners.
The Hidden Lives of London Streets by James Morton.
​London Made Us by Robert Elms.
Inside Soho by Mark Edmonds.
Moon Over Soho by Ben Aaronovitch.
Soho by Richard Scott.
Shakespeare in Soho by Jeremy Reed.
Soho Nights Series by Ronnie O'Sullivan.
Night and the City by Gerald Kersh
Soho Lives by Catherine Garcia.
The Soho Don by Michael Connor.
Soho House Guide by Shena Mason.
Soho 4 A.M. by Nuala Casey.
Goodbye to Soho by Clayton Littlewood.
Lord Soho by Richard Calder.
Soho Angel by Greg Keen.
Soho Blues by Neil Blackmore.
Garçon Style by Jonathan D Pryce
Soho Square, African Anthology series by Simon Ogude.
Soho Square: New Writing from Ireland, Anthology.


In recent times the film Bohemian Rhapsody was launched with a huge neon display occupying the entire length of Carnaby Street.  A couple of years earlier the Catalogue Raisonnee of artist Francis Bacon was launched with a collection of his paintings worth together more than £100 million in an unassuming first floor on Lexington Street known only to locals.

But the everyday Soho has to make do with the money spent by punters from all over London, the UK and the world.  Their support is essential for the weekly survival of the place.

Note: the list of books and films will be updated regularly.